What are Soft Story Buildings? A soft story building is a multi-story structure built with a first floor that is much less rigid (soft) than the floors above, such as in an apartment with tuck under parking. They can and have failed in significant seismic activity due to unreinforced openings on the ground floor which caused far more movement than the soft story building could withstand, resulting in the upper floors COLLAPSING on top of it. The Los Angeles Soft-Story Retrofit Program has begun to help prevent this from occurring in the future.

There are an estimated 13,500 soft story structures in Los Angeles alone that have been identified to be in need of a retrofit. Retrofitting soft story buildings has now become mandatory by the City of Los Angeles as of November 22, 2015.

In November of 2015, the City of Los Angeles signed into law, the Mandatory Retrofit Program under Ordinance 183893, requiring the retrofitting of wood-frame apartment buildings to better withstand a major earthquake. Structures that are in danger of being catastrophically damaged in the event of an earthquake are to be upgraded within a finite amount of time. This includes soft story retrofitting in Los Angeles county buildings. Los Angeles now has the nation's toughest earthquake safety rules.

From the Los Angeles Times:
“Under the law, property owners will have seven years to fix wood apartments and 25 years to fix concrete buildings. The city has already identified about 13,500 apartment complexes that officials suspect need repairs. A Times investigation in 2013 found more than 1,000 older concrete structures — including landmark buildings in downtown, Hollywood and Westwood — that require close scrutiny for retrofitting.”

Many more cities in the region are following suit and mandating the same soft story retrofit Los Angeles has signed into law. This is in an effort to avoid devastation and to safeguard residents from harm that has been caused by large earthquakes such as the Northridge quake in 1994.

How Does This Soft Story Retrofit Law Affect You?

It is no longer an argument as to whether or not an earthquake of significant magnitude is going to strike Southern California - it’s now just a wait to find out WHEN. The longer your building doesn’t get its soft story retrofit in Los Angeles, the more likely something disastrous could occur.

There is no doubt that an unreinforced building could collapse, causing irrevocable damage to the structure - and those who reside in it. But did you know that you could be held liable for these catastrophes? There are multiple instances of property and bodily damage stemming from an earthquake resulting in the property owner getting sued for seven-digit figures.

Getting your building the soft story retrofitting Los Angeles structures need is not only a great idea which could save lives, your building and a costly lawsuit, but did you know that it could also lower your insurance premium? Not only that, there are grants, tax breaks and financial aid that you can apply for to assist you to safeguard your building. Not to mention that you could have your tenants help you pay for these repairs - up to 50%!

The following are compliance time frames. Compliance dates are calculated based on the date the owner received notice.

From the receipt of the Order to Comply:

As of January 7, 2019 it appears there are about 4,500 remaining buildings that have yet to submit retrofitting plans.

Use the interactive map below to find out if your building is on the Los Angeles Soft Story Property List. This list is preliminary and some of these buildings, upon a detailed inspection, will not need earthquake retrofitting.

Alpha Structural will carefully inspect the building to isolate the most practical and cost efficient solution. Utilizing our decades of foundation repair and seismic retrofitting experience we are able to design and engineer in a way to save on construction costs. Each building must be evaluated individually.

Common solutions utilized are steel moment frames and plywood shear walls (strengthening existing walls). This adds the proper support the soft story structure will need against seismic activity. As each property is unique, all soft story retrofitting in Los Angeles must be customized for each individual property. Alpha Structural will design, engineer, acquire the permitting needed and retrofit the structure, all in-house.

Our team is highly-qualified and has extensive experience with complex soft story retrofitting in Los Angeles. Call us today at (323) 258-5482 to schedule an inspection! 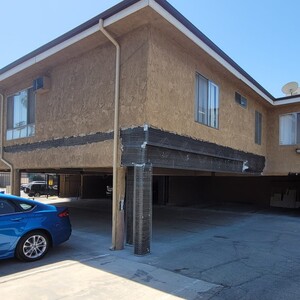 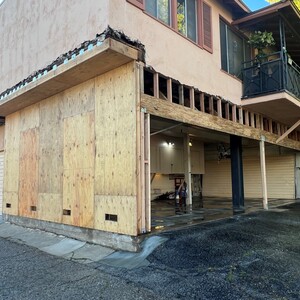 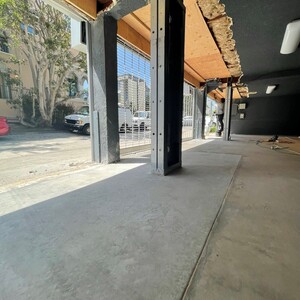