A soft story building is a multi-story structure built with a first floor that is much less rigid (soft) than the floors above. A building with a weak first floor often have large openings underneath like a garage, large overhang or windows or tuck under parking. These bottom floors are not likely to withstand the pressure of significant seismic activity due to unreinforced openings on the ground floor and the lateral forces that push a structure from side to side.

A major earthquake will likely cause far more movement than the soft story building can withstand resulting in the upper floors collapsing on top of the first floor and large openings. The West Hollywood soft story retrofit program is designed to help prevent such a disaster from occurring in the future by properly strengthening soft story buildings.

On April 17, 2017, the City of West Hollywood signed into law a mandatory retrofit program under Ordinance 17-1004 requiring the retrofitting of existing wood-frame buildings with soft, weak, or open front wall to better withstand a major earthquake. The ordinance also concerns about cripple walls and sill plate anchorage in existing wood-frame buildings. Structures in danger of getting damaged catastrophically in the event of an earthquake are to be upgraded within a finite amount of time. This soft story retrofitting in West Hollywood is an effort to avoid devastation and to safeguard residents from harm that has been caused by large earthquakes such as the Northridge quake in 1994.

The seismic retrofit program for the City of West Hollywood includes wood-frame soft story buildings with the following characteristics:

How Does This Soft Story Retrofit Law Affect You?

It is said that an earthquake of significant magnitude is an eventuality in Southern California. The longer your West Hollywood soft story building doesn’t get a retrofit, the more potential something disastrous could occur. We are prepared to assist you in all phases of the retrofitting process. Completion of this structural reinforcement could result in a lower insurance premium and, depending on current incentives, you may be eligible for grants, tax breaks and financial aid to help you upgrade your building.

If and/or when an earthquake does occur, vulnerable soft story buildings could incur damage to their structural integrity. That is why the City of West Hollywood has taken the proactive road to saving property damage and potential lives.

More than 700 buildings fall within the scope of the soft story ordinance, according to a seismic retrofit survey conducted by the City of West Hollywood. The mandatory seismic retrofit ordinance is intended to address soft story buildings, including multi-story wood buildings containing exterior with soft, weak or open-front walls that are most vulnerable and reduce the risk of catastrophe in the event of a major earthquake.

Once the plans have been approved and the permit is in place, a soft story retrofit usually takes us 1-4 weeks depending on the scope of work involved.

The following are compliance time frames. Compliance dates are calculated based on the date the owner received notice.

From the receipt of the Order to Comply:

Alpha Structural, Inc. is a leader in the field of soft story retrofitting having received numerous awards for their excellence in work and customer service. In 2018 alone, Alpha Structural was recognized for its excellence in customer service winning The Talk Award and Pulse of the City Award. They have received the Angie’s List Super Service Award for over 8 years straight and been recognized as one of the fastest-growing private companies by Inc 5000 and the Los Angeles Business Journal. They have further received commendations and certificates of recognition by many cities in the Los Angeles area.

One of our specialties is to bring a building like yours up to par with today’s strict building codes. We will carefully inspect your building and isolate the most practical and cost efficient solution. Utilizing our decades of foundation repair and seismic retrofitting experience, we design and engineer to help you save on construction costs.

Our experienced team evaluates each building individually. Common solutions utilized are steel moment frames and plywood shear walls (strengthening existing walls), which adds proper support to the soft story structure against seismic activity. Every property is unique and that means all soft story retrofitting in West Hollywood must be customized for each individual building. At Alpha Structural, we will design, engineer, acquire the correct permit and retrofit your structure, all in-house.

Our team is highly-qualified with extensive experience in complex soft story retrofitting in West Hollywood, Los Angeles, and other surrounding cities. Call us today at (323) 258-5482 to schedule an inspection! 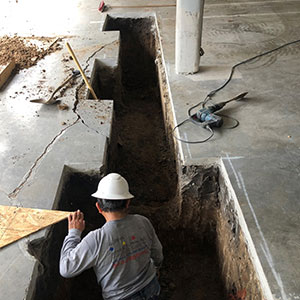 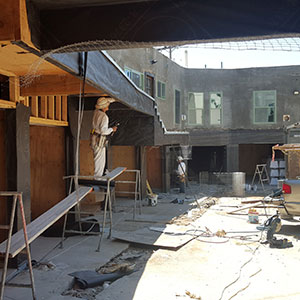 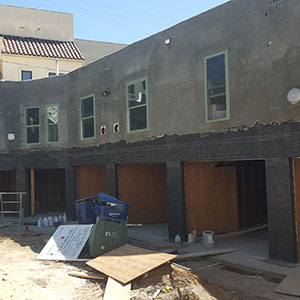